We call for new and free elections in Belarus 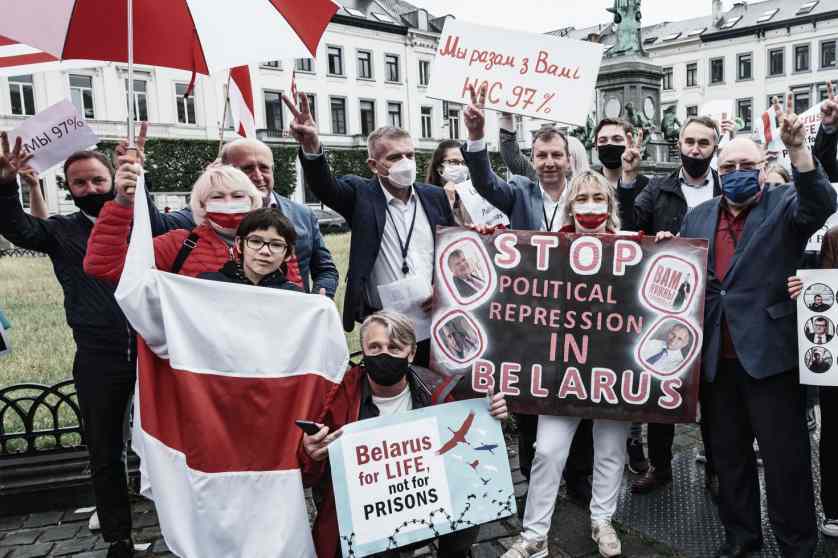 In a common statement, political leaders from EPP, S&D, Renew Europe, Greens/EFA and ECR groups in the European Parliament join forces to call for new and free elections in Belarus and strongly condemn the violence and torture perpetrated against peaceful protesters organised by Lukashenko’s regime: “We applaud the Belarusian people for their courage and determination and strongly support their desire for democratic change and freedom. The 9th August presidential elections were neither free, nor fair, and credible reports point to a victory of Svetlana Tikhanovskaya. We therefore do not recognise Alexander Lukashenko as the re-elected President of Belarus and consider him a persona non grata in the European Union. We join the Belarusian people in their demand for new and free elections, under the supervision of independent observers. We strongly condemn the arrests and appalling acts of violence and torture perpetrated against peaceful protesters, and call for a full investigation of these crimes, which cannot go unpunished. In this regard, we remind Alexander Lukashenko of his responsibility. We strongly condemn the suppression of internet and media, road blockades, and intimidation of journalists in order to stop the flow of information about the situation in the country. We call for the immediate release of all those arbitrarily detained, and political prisoners who have been detained before and during the election campaign. We welcome the decision of EU foreign affairs ministers to blacklist all those responsible for violence and the falsified presidential elections. We urge the sanctions list to be compiled as soon as possible, so people who committed these crimes are banned from visiting the EU and their assets are frozen. The European Union can and must do more to further the cause of democracy and freedom in Belarus, including by strengthening assistance to Belarusian civil society and immediately ceasing any financial support to the government and state-controlled projects. We suggest the relaunch of targeted EU assistance programmes to help repressed people in Belarus and their families. The European Union should equally take strong and unequivocal action by reassessing its relations with the current regime in Belarus, in line with EU values and principles, and reconsider its cooperation with Minsk, including within the Eastern Partnership. The EU should prepare a comprehensive review of its policy towards Belarus, taking into account different scenarios and developments in the country, that also includes a substantially increased role for the EU (politically, technically, financially). We regret that access to Belarus was denied by the Lukashenko regime to two Members of the European Parliament, Petras Austrevicius and Robert Biedron, who were travelling in their private capacity to Minsk to support the people in Belarus. We propose that EU appoints a special representative for Belarus in order to support the process of a peaceful transition of power in accordance with the will of Belarusian people. We call on the Russian Federation to refrain from any interference, covert or overt, in Belarus following the election, and call on EU institutions and Member States to vigilantly counter any Russian actions in this regard. We call on the EU to support a peaceful transition of power, and engage in a dialogue with the Belarusian opposition and civil society with a view to launch a new electoral process, under the supervision of a new Electoral Commission, a body that can be trusted by all the parties. It is the right of the people of Belarus to elect their own political representatives. Zhyvie Belarus!“ Manfred Weber, President of EPP Iratxe García Pérez, President of S&D Dacian Cioloş, President of Renew Europe Ska Keller and Philippe Lamberts, co-Presidents of Greens/EFA Ryszard Legutko and Raffaele Fitto, co-Presidents of ECR