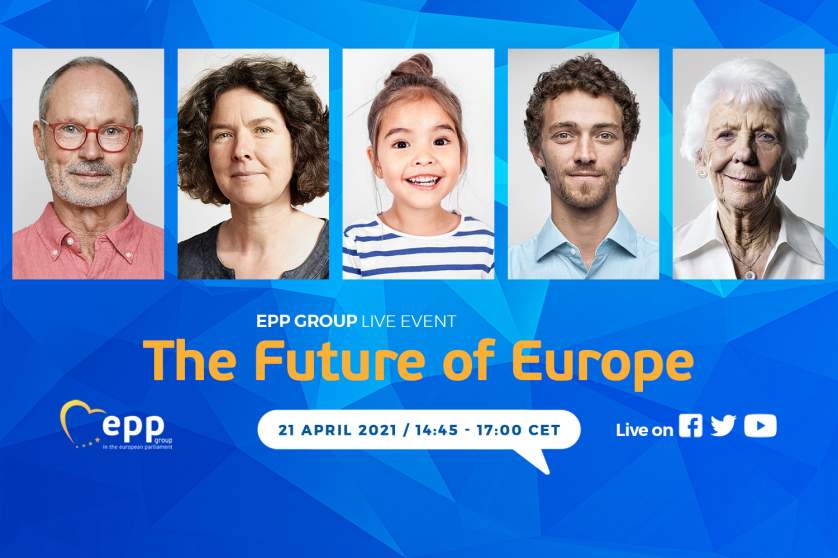 Join us for a dynamic debate on the Future of Europe. Our European Union has accomplished great things in the past thanks to its ability to renew itself, to change and adapt to the new challenges we face. In the last decade, Europe has had to cope with many crises in a world of rising systemic rivalries. This now requires us to reflect deeply on the way forward.

Together with Federal Chancellor of Germany, Angela Merkel, Chairman Manfred Weber, Vice-Chairman Paulo Rangel and with renowned experts, we will reflect and discuss the goals Europe should reach and how it envisages itself in the coming years, especially in order to provide brighter prospects to the younger generation and to build a stronger European democracy that empowers its citizens.

#CoFoE event: The Future of Europe

PANEL I: EUROPE FOR THE YOUNG GENERATIONS (EN)

Response to videos of youngsters on their hopes for the future

PANEL II: LOOKING AT THE CONFERENCE ON THE FUTURE OF EUROPE - A STRONGER, DEMOCRATIC EUROPE READY TO DELIVER (EN)

Debates with MEPs (amongst others, Isabel Wiseler-Lima MEP and Geoffroy Didier MEP) and audience

Any media wishing to record the event or embed a stream on their own website, please contact amanda.said@ep.europa.eu. Languages available: EN and DE

Vademecum of the guest speakers