YOU are the Future of Europe - Europe Week 2021 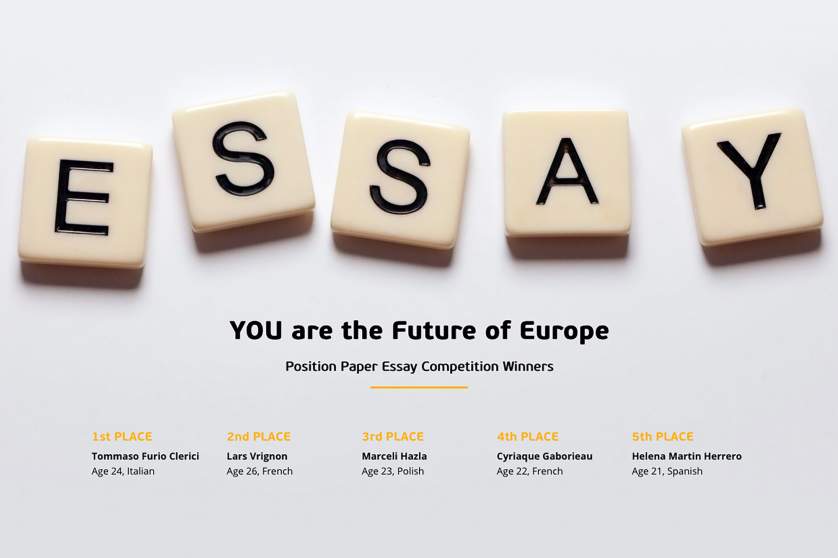 The annual “Open Days”, when the European Institutions open their doors to the public to celebrate 'Europe day' on the 9th of May, had to be postponed due to the COVID-19 pandemic.  The European Parliament responded by organising its first ever “Europe Week”, celebrating a series of virtual events that invited our Group to reflect on the themes of citizens’ involvement and the Future of Europe.  As part of this event we at the EPP Group organised our 1st ever Essay Competition for Graduates - YOU are the Future of Europe.  Participants were asked to write an EPP Group Position Paper on Youth Unemployment, with the first prize of a paid traineeship in our political Group.  We had an excellent response to the essay competition and the jury had the unenviable task of choosing a shortlist of the 10 best essays and then selecting the five finalists in order of ranking.

Participants were asked to provide an answer of up to 2,000 words to the question below, which was asked by the EPP Group Chairman, Manfred Weber, during a recent conference on jobs in March:

“If today’s generation is the best educated ever, but currently the biggest problem is unemployment, what is going wrong?
What are you are expecting from the European Union to provide a good future for the younger generation?”

Please find below a short teaser synopsis of the main ideas put forward by the winning authors.  Stay tuned as the EPP Group will publish the full essays and interviews with the winners in the upcoming weeks.

'Too young and too educated for reskilling.  Three suggestions to rethink youth unemployment beyond the education bias'.

In his winning paper Tommaso Furio Clerici outlines the education bias existing in relation to youth unemployment.  He argues that although a person with more education is less likely to be unemployed, it does not follow that a high-enough level of education for all youth will eliminate unemployment.  Tommaso suggests that along with education youth unemployment should be more broadly framed and should also be viewed as a problem that involves growth, entrepreneurship, and labour productivity and that the European Union needs to re-think its policies beyond the education bias to help Member States and citizens.   Jobs are not only a by-product of education.  For Tommaso the best way to tackle unemployment at the supranational level is by fostering growth in innovative ways, paving the way for young entrepreneurs and therefore fostering labour productivity.  He argues that framing youth unemployment as a growth issue can be a driver for more achievements in pursuing a competitive and fair economy.

'The European Union must, just like the nation-states, in order to respond to the various economic, ecological and financial challenges, no longer think in terms of their policies according to the old ways of thinking. It should think strategically by focusing its attention on industrial and scientific production'.

Lars  Vrignon focused on a very progressive future thinking overhaul and reorganisation of the economy and on the digital revolution which is transforming not only our economies and societies but also the structure of our mind in a far deeper way than the Industrial Revolution did before.  He maintains that it is urgent to completely and thoroughly review the paradigms that structure our analysis of the economy and, above all, determine new public policies. For Lars millennials have passed to a more creative way of life in constant search of novelty and meaning to their actions. His thesis is to reorganise our productive apparatus to favour augmented reality and AI and the automation of repetitive tasks freeing people up to work less and focus more on building values and solidarity through a reviewed educational system.  His theory is that the jobs of tomorrow will be mainly in non or partially productive fields.  They will be centred on humanity, nature, scientific progress, space exploration and spirituality, supported by a highly automated production of material wealth.

'The trap of industry-driven development'.

In her entry, Marceli Hazla went back to the beginnings of European integration and the post-War order to characterise the most important factors for the success of post-war European economies and to identify the moment when the situation started to deteriorate in relation to education and knowledge being the key to professional success as in previous generations.  In her conclusions, as a way of dealing with de-industrialisation and the radical changing of economies due to technological change and outsourcing to third countries she sees the biggest challenge as preparing European Member States for the transition to the new, high tech and service based economy we now find ourselves in.  She suggests schools and universities prepare graduates for lifelong learning and the constant improvement of their qualifications, the paradigm in which one obtains a job for life after graduation no longer holds true.  Governments could offer free courses in new technologies and create opportunities for people to change careers, scholarships or guaranteed employment in the public sector based on high performance could be another option.  The redesigning of university courses to be more study and work based with tax breaks for companies that employ interns would also maximise work experience opportunities during studies. She concludes that education is now simply a standard that everyone expects but experience is invaluable and harder to acquire but could help to reduce youth unemployment in Europe.

'To offer a bright future to our youth, we must understand that youth is the future. We must put all necessary means at their disposal to accompany them, harmonise them and develop their capacities'.

Cyriaque Gaborieau references the fact that the Y and Z generations are defined as more educated because of their ability to adapt and due to the development of digital technology; however, there are three current difficulties exacerbating youth unemployment: adapting to globalisation, the disunity of nations to establish a common future project and the health crisis linked to COVID-19.

Cyriaque references the domination of the USA and China in investment in digital technology with the EU on the sidelines, making it difficult for young people to access the labour market as they are not experienced enough and underrepresented.  He quotes Euro MEP and philosopher, Francois Xavier Bellamy, that sharing a common goal promotes cohesion and in order to build a strong economy and therefore employment the EU needs to be able to better demonstrate this message of Union and unity. He stresses the need to increase highly qualified human capital by investing in research programmes especially in the environment and digital, to increase academic exchanges under Erasmus, encourage the recognition of diplomas, volunteer work and internships in EU countries and to involve young people more in pubic studies to help define the Europe of tomorrow. He also advocates for the need of lifelong learning and a policy of inclusion for people with disabilities to enter the labour market.

'The European Union can avoid a lost generation with a more inclusive, effective and entrepreneurial approach'.

Helena Martin Herrero in her position paper reminds us of the devastating and disproportionate impact the pandemic is having on youth employment but also that this effect is further exacerbated when it comes to young people with disabilities.  She argues that the European Union can avoid a lost generation with a more inclusive, effective and entrepreneurial approach.  She also argues that the European Union is equipped with two potentially useful instruments, the Reinforced Youth Guarantee and the Recovery and Resilience Facility, which if reinforced and better advertised could be improved and be more inclusive. She calls for a revision of the monies invested to encourage programmes to teach the culture of entrepreneurship and mentoring across Europe and that a percentage of the monies should also be set aside specifically for the employment of people with disabilities through specialised agencies which also provide job coaching.

The standard of all the essays was extremely high and the competition winners should be congratulated in taking part and their particularly original contributions.  The EPP Group looks forward to further in-depth discussions with the winners in an upcoming coffee morning with Members of the EPP Group and the participants in the coming months.

The winner of the competition, Tommaso Furio Clerici, will take up his traineeship in the Strategy Unit of the EPP Group in September 2021.

Certificates of achievements and medals have been awarded to all the winners (see information on additional prizes below).