More stable food prices and better distribution of subsidies will benefit farmers as well as shoppers, under a reform approved by the European Parliament’s Agriculture Committee. The two key pieces of legislation are part of the EU’s overhaul of the Common Agricultural Policy, which helps ensure food security while improving farming’s impact on the environment. The reform, authored by the EPP Group’s Esther Herranz García, would shift the management of CAP subsidies from Brussels to the national governments while cutting red tape for farmers and governments. Legislation co-authored by the EPP Group’s Michel Dantin would extend the EU’s management of farm production beyond the dairy sector. This would improve protection of farmers from market shocks. 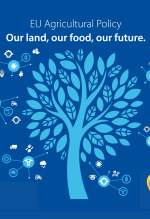 This publication highlights the EPP Group's commitment to the reformed CAP, which enables our farmers to produce high quality food and ensures the protection of our unique European environment.