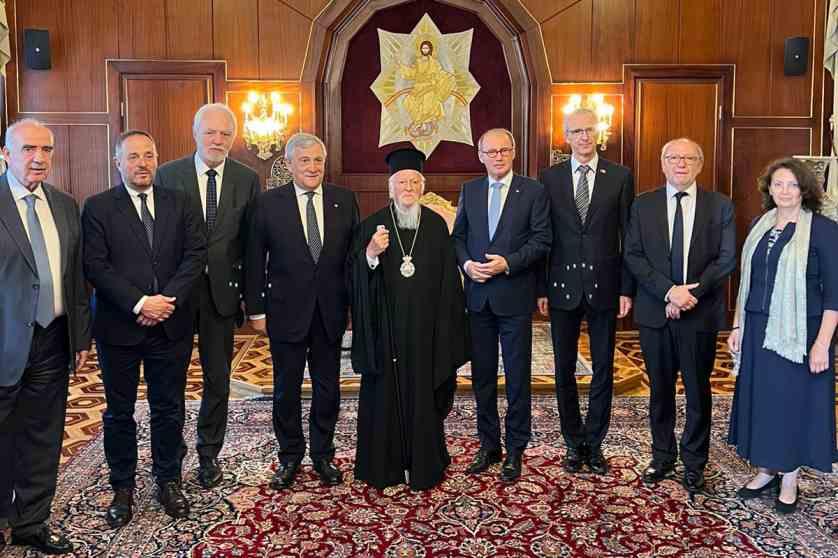 EPP Group MEPs met today with the Ecumenical Patriarch Bartholomew I of Constantinople to discuss the role of the Orthodox Church to promote peace and understanding between religions and peoples.

“With the Kremlin using religion as a foreign policy instrument, we must strengthen interreligious dialogue, which ensures lasting relationships based on goodwill and respectfulness. We want to intensify and revive the contacts between the EPP Group and the Ecumenical Patriarchate, our oldest partner in interreligious and intercultural dialogue. Especially now, it is crucial to keep faith in a united European community and to expand all our efforts to unite it”, said MEPs Jan Olbrycht and György Hölvényi, co-Chairs of the EPP Group’s Working Group on Intercultural and Religious dialogue.

“Dialogue requires two sides that want to cooperate based on common rules and values. The Russian Orthodox Patriarch Kirill on the other hand is an architect of war. He propagates and follows the same interests as Vladimir Putin to expand power outside Russia. It was a mistake to take Patriarch Kirill off the EU sanctions list”, emphasised Othmar Karas MEP, First Vice-President of the European Parliament, responsible for dialogue between the EU Institutions and churches, religious associations, and non-confessional organisations.

“Today’s meeting is of strong symbolism and conveys a message of support to Patriarch Bartholomew, who has, from the very beginning, taken a clear position against the war in Ukraine and against the revisionist aspirations of the Russian President. Patriarch Bartholomew shares the values of freedom, peace, democracy and rule of law worldwide”, underlined Vangelis Meimarakis MEP, Vice-Chairman of the EPP Group.

”In our capacity as EPP Group Members, we must build as many bridges as possible to reach a diplomatic solution to this cruel war. The Orthodox Church has traditionally been a bridge between the East and the West. All Christians should work hand in hand for lasting peace between Christian countries like Russia and Ukraine”, stressed Antonio Tajani MEP, Chair of the European Parliament’s Committee on Constitutional Affairs.

“We are united by our faith and our commitment to the good of the people. The role of the Church is to try to stop the bloodshed and to establish peace. Naturally, where Patriarch Kirill and the Russian Orthodox Church have failed, there is room for a more prominent role for other representatives of the Orthodox Church. Our faith is not about violence", said Ivan Štefanec MEP, Head of the Slovak Delegation of the EPP Group.

The EPP Group is the only political Group in the European Parliament with a standing Working Group on Intercultural and Religious Dialogue. Already for several decades, this Group has been promoting mutual understanding, bringing together European decision-makers with Orthodox, Catholic, Protestant, Islamic and Jewish representatives.